Again, you went back home without actually doing anything. A marketing strategy is needed, but time and again employees have come into the office with questions, e-mails wanted to be answered, and the intern has asked for a job reference. At the end of the day, the entrepreneur talked a lot – but didn’t develop a marketing strategy.

Does this sound familiar? Do you often lack the time for important, long-term tasks because more urgent things keep getting in the way?

No wonder: Even if you have delegated tasks, as a boss you remain the contact person for many questions and problems. How do you still manage to make time for really important strategic tasks that will lead your company to success? The solution: set priorities with the Eisenhower principle.

Why Is The Method Called The Eisenhower Principle?

There are many time management strategies. What is special about the Eisenhower principle is that it has outlived all trends. Why? Because – if you apply it correctly – it works.

How Does The Eisenhower Principle Work?

Eisenhower’s idea is simple: You assign four quadrants to your tasks in the so-called Eisenhower matrix: 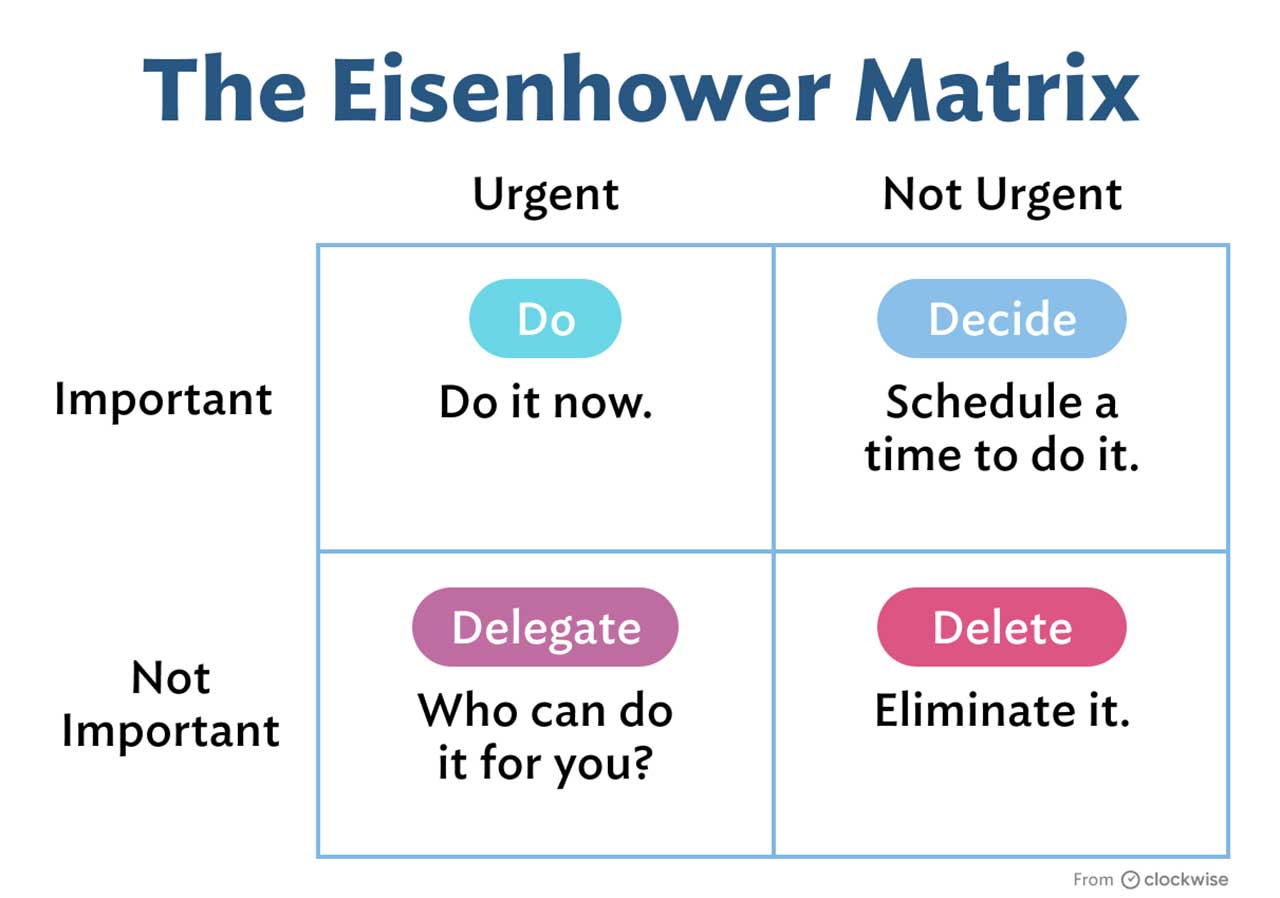 A simple principle – but in practice it is often difficult to correctly assign tasks to the Eisenhower matrix. Should I go to the lecture of my long-time business partner, even though the topic does not interest me? Is it important that I call assistant manager back immediately? How quickly should I respond to the customer’s complaint?

How Do You Correctly Classify Tasks In The Eisenhower Matrix?

Almost all tasks that are brought to you from outside pretend to be extremely important and urgent. “Everyone would prefer to have everything done the day before yesterday, everything is urgent,” says Seiwert. The A quadrant of the Eisenhower matrix is therefore quickly overfilled. “The trick is to limit yourself to the essentials,” Seiwert says. So:

Example: If someone has asked for a callback because you haven’t paid an overdue invoice, this is an A-task. You should take care of it yourself immediately. A-tasks have a deadline and therefore the highest priority.

The best time for A-tasks is in the morning, says the time management expert. Because in the morning we are more concentrated than after several hours of work.

B-Tasks: Important, But Not Urgent

B-tasks are long-term tasks that are important for your company – but that you don’t have to do overnight. For example: develop a social media campaign or a PR strategy. For Lothar Seiwert personally, a B-task would be to design a new book.

“B tasks are usually neglected,” says Seiwert. “Many entrepreneurs only deal with it when the train has almost left the station and the market has overtaken them.” That’s why entrepreneurs should schedule time every day for a B task – otherwise they’ll never get around to it.

C-Tasks: Urgent, But Not Important

Reference is important for the intern – but rather secondary for bosses. A typical C-task. The solution: delegate. Designate an employee to write the reference.

It’s a different story for lone wolves. Without employees, they can’t gibe up any tasks. If solo entrepreneurs can’t concentrate on building their business because most of their working time is spent on C-tasks, Seiwert recommends a virtual assistant: “Let a virtual assistant help you for little money. It can organize, research or book trips for you.”

If you need to work through C-tasks in person, schedule a block of time for it. “But not in the morning during your performance peak,” Seiwert says.

D Tasks: Not Urgent, Not Important

Tasks that are neither important nor urgent can be thrown in the trash – hence D-task. Sound harsh? “Ask yourself the question: what would happen if I didn’t do what is required?” advises Lothar Seiwert. If the answer is: “Probably nothing” – get rid of it.

And if an important task accidentally ends up in the trash, someone will remind you of it, says Seiwert.

Such tasks are, for example, invitations to events that are not of interest to you personally. That’s where it’s called saying “no thanks” in a friendly but firm way. “I had a request to be on an online platform,” Seiwert says. “The offer seemed dubious and I decided not to answer it specifically, but simply to delete it.” A case for the trash.

What Are The Weaknesses Of The Eisenhower Principle?

According to Seiwert, the only weakness of the Eisenhower method is “the human being.” 50 to 60 percent of the things we do every day, he says, are urgent but not that important.” The reason: lack of self-discipline and wrong priorities.

To apply the Eisenhower principle correctly, you should assign each new task to a quadrant. “Depending on the job, I might have to change it three times a day, five times, or not at all,” Seiwert says. “It needs to become a routine. Like brushing your teeth, putting on makeup or shaving.” If you only use the Eisenhower principle occasionally, you’ll quickly lose track.

Exercise For Using The Eisenhower Principle

After making sure you are not interrupted, pick up a piece of paper and pen and answer the following questions:

– What percentage of my time do I spend on A, B, C and D tasks?
– What obstacles do I need to remove in order to have more time for A and B tasks?
– Who or what could help me with this?

What Do You Think?
Tags: ADVICE, CAREER, SMART LIVING

5 Body Language Mistakes You Should Avoid At Work

4 Tools You Can Utilize To Stand Up To Verbal Attackers

5 Types Of Exercise To Keep Your Mind Sharp

How To Start The Day Full Of Energy?

When Should You Shower – Morning Or Night?

Why You Should Never Sit On The Bed With Outside Clothes