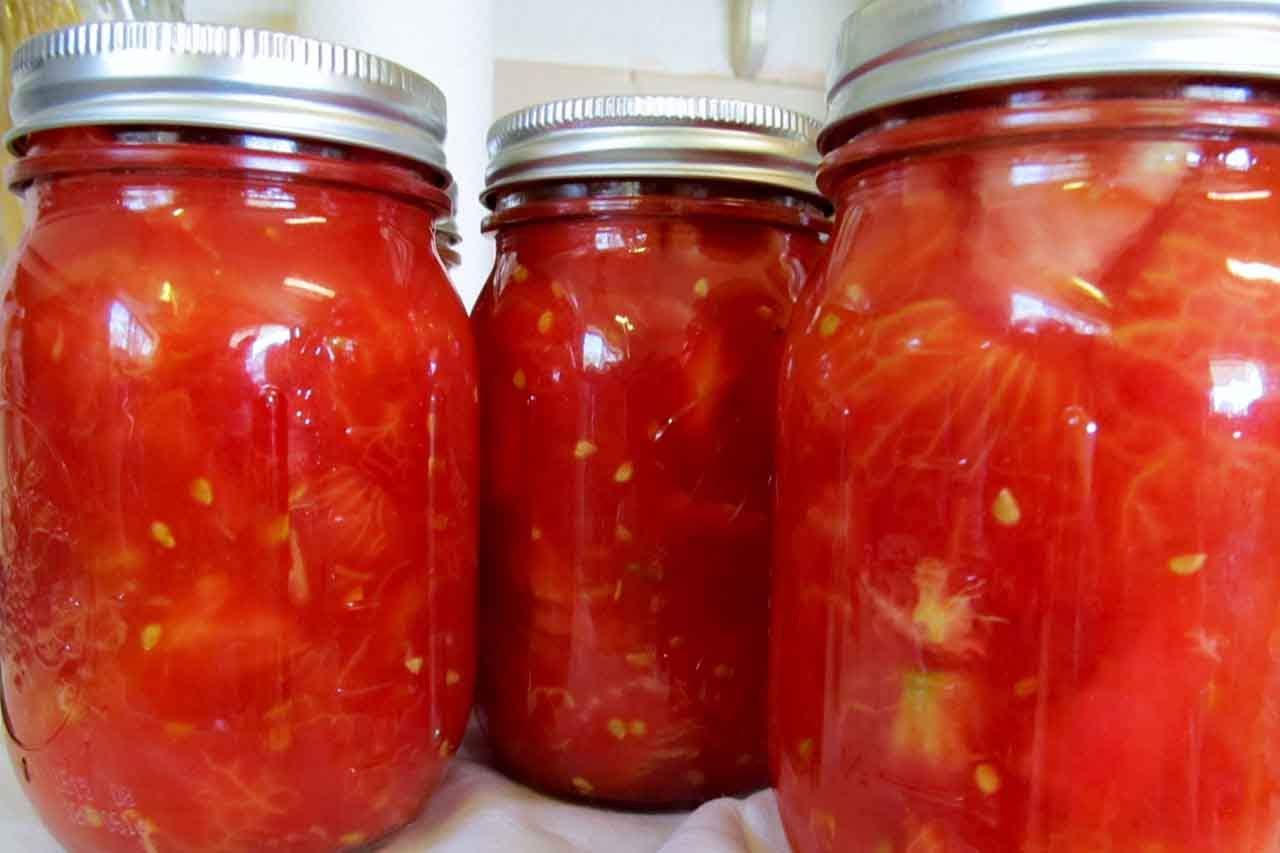 It is best for us to eat vegetables when they grow in their own season. Because we have no idea how they grow summer vegetables in winter or what kind of chemicals they used in order to keep them from spoiling.

It will be wise to state some pivots before getting into the real fact:

You need to work very clean in order to prevent spoilage. You need to wash your hands and tomatoes very carefully and try not to touch anywhere after washing your hands. If you work really clean, you can be certain of them, they will not be any spoilage.

In these methods, you also need to use some ladle or really big spoon in order to put tomatoes into jars. You shouldn’t use your hands for that job because you need to work clean and tomatoes will be very hot because we will pour boiled water over them. But the point is, you also need to boil the ladle, jars and jar lids that you will use for that job, we don’t want any organism left on our tomatoes or ladle. Boiling them in a large pot for 5 minutes would be more than enough.

Each method has its own properties. If you want your tomatoes original and unchanged, you may use method 1 but you would put a few tomatoes by using method 1.

If you want only the taste of the tomatoes and mostly use it for meals as a paste, you may use method 2 because by using it, you can put the maximum amount of tomatoes into a jar. Method 3 have sort of all advantages of the other two methods.

Boil enough amount of water within a large pot, the water level must be above the tomatoes. If you want to prepare more than one jar (probably you will), you should change the water after boiling 9-10 tomatoes.

Remove stems of the tomatoes. Put them in a large pot, large enough to fill a jar; since you will work very clean, it will be wise to fill the jars step by step. Pour boiling water over the tomatoes and continue boiling (so pot must be on the hob) for nearly 1-2 minutes.

Finally, take tomatoes one by one using a ladle and put them in jars without peeling them. You need to put tomatoes into jars while they are still hot and seal it very quickly.

Cut the tomatoes from the center into two halves, we will grate them and by slicing them in halves that will be much easier. Grate halved tomatoes by holding them from the skin. After grating them, only pulp of the tomatoes would remain.

Put the juicy tomatoes into the large pot and boil them for 3 minutes. Finally, add 2 cloves of garlic and finish boiling. Put the boiled tomatoes juice into jars and seal them.

If we use method 1, we can’t put enough tomatoes into a single jar. This method is actually like method 1 but it is much easier.

Cut the tomatoes into 4 quarters and after cutting it, try not to touch it by any means necessary. You may use a fork instead of your hands as long as you boil the fork before using it. After cutting the tomatoes, put them in a boiling water (by using a fork) and let them boil for 1-2 minutes, do not exceed 2 minutes because tomatoes will lose their flavor if you exceed 2 minutes.

After boiling, put tomatoes into jars one by one while they are still hot. You may press tomatoes into the jar by using spoon or fork. If you want to put large amounts into a single jar, you may press and squeeze them into the jar after every 4-5 tomatoes pieces but if you want your tomatoes with their original shape, you may skip pressing part. Air trapped in the jar will not make any harm to our tomatoes but it may affect the oil layer. First tomato juice fills the air gap, then the oil layer, so plan ahead.

After that point, you may add cumin seeds into the jar because it is a fermentation inhibitor. Cumin seeds will not change its flavor so feel free to add them, but this step is also optional so if you don’t have any cumin seeds and don’t want to buy them, you may skip that part either.

At this step, you should have jars full of tomatoes. Tomato juice should exceed top layer of tomatoes, if it is not, just press and squeeze the top layer by using a fork.

You can keep our canned tomatoes within a room, you can also use refrigerator but if you are preparing them for winter, probably you will use lots of jars and keeping them in the refrigerator would be much harder. You can keep them at room temperature but they shouldn’t expose to the sunlight. Try not to shake them after adding oil because you may break the oil layer which prevents spoilage.

You can keep tomatoes for 6-7 months by using this method and after opening a jar, you should keep it in the refrigerator for a week without spoilage.

By using this method, you may also use tomatoes in salads because tomatoes will preserve their original flavor. All of these methods requires maximum hygiene, if you are careful about that, you can protect them from spoilage. Even if all these methods are great, Method 3 is the easiest and favorable one. If you want to decrease the chance of spoilage with maximum tomato flavor, you should choose Method 3.

What Do You Think?
Tags: FOOD

4 Mistakes We All Make When Defrosting Food

Chicken Soup With Carrots And Potatoes

The Secret To Healthier Hair Might Be Hidden In The Kitchen